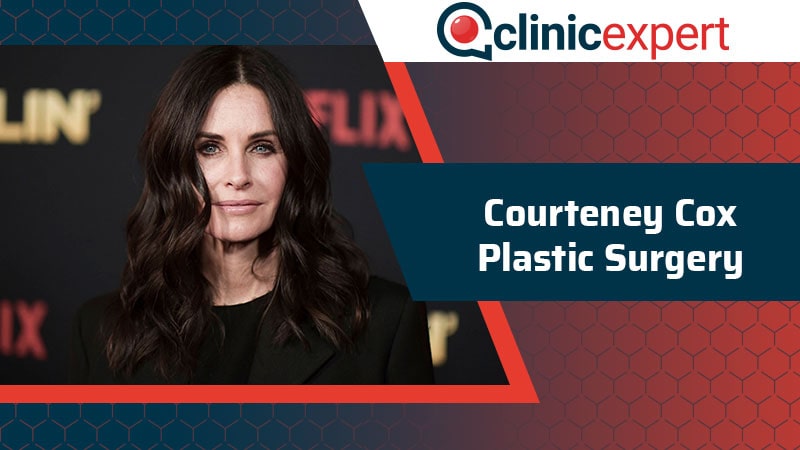 Courteney Cox Plastic Surgery. Courteney cox is an American and one of the most famous actresses in America. She named the 9th sexiest woman in the world in 1998. Thanks to her natural beauty, she starred in Friends, one of the most popular sitcoms in America. She is known for her portrayal of “Monica Geller” in Friends. Furthermore, She has starred in many TV series and movies. Courteney Cox still has the figure of a much younger woman. For many years there are many gossips about how Courteney saves her natural beauty? Is she save her beauty with plastic surgery or something different?

Her fans sought an answer to questions for years because it is very obvious that Courteney’s face has changed since she becomes famous. Finally, she announced that she got help from plastic surgery so her beauty could last through the years. She achieves this reputation by protecting its beauty with some plastic surgeries. So in this essay, we will see her life, advice, and changes.

Who is Courteney Cox?

Courteney cox was born on June 15, 1964. She is an American actress and also she worked as a producer and director. Courteney Cox knew worldwide acknowledgment for the role as Monica Geller on the NBC sitcom Friends (1994 -2004). She was born in Birmingham, Alabama. Courteney Cox Arquette’s real name is Courteney Bass Cox. Her economic situation was very good because her father (Richard L. COX) is a businessman and her mother (Courteney Cox(they take the same name)) is a housewife. When she came to ten years old, her parents divorced. Courteney Cox grew up with her mother and her step-father ( Hunter Copeland). She lived a very lux neighborhood named Mountain Brook in Alabama. She got an education from Mountain Brook High School. Courteney Cox was the school’s cheerleaders and involved tennis and swimming. When she graduated from high school, she started Mount Vernon University to be an architect.

Then she broke up University

Courteney Cox signed an agreement with the Ford Modeling Agency in New York. She wanted to continue her career as a model. She took place on the covers of some magazines like “Little Miss” and “Tiger Beat”. Maybelline appeared in commercials for Noxema, New York Telephone Company. Meanwhile, she started taking acting lessons. The first flash in Cox’s career was when she first used the word “menstruation” in American television commercials for Tampax tampons aired in 1985. In 1994, she appeared before the audience as Jerry Seinfeld’s girlfriend in the episode of Seinfeld’s “The Wife”. This series, which was very successful at this time, marked an important turning point in Cox’s career. Courteney Cox recognized worldwide as Monica Geller in Friends.

Courteney Cox went to the series for the character Rachel but she was chosen as Monica. The series started in 1994 and last 2004 and also was one of the most popular sit-coms in America. There was happened something different thing. Courteney Cox was the only name that was not chosen for Emmy Awards among the six main characters of the series. Who knows maybe this situation gave her more fame. Although she was not chosen for Emmy Awards, She succeeded in establishing a throne in the hearts of the American people. She not only gained a reputation in America but also underestimated in all countries where the series is watched. The series also nominated for the American Comedy Awards.

Courteney Cox Plastic Surgery She looks undeniably great despite her 56 years old. We know that the main reason for this is the touches of plastic surgery. Cox got cheek implants, lip fillers, and Botox injections to rejuvenate her appearance. Courteney begins to experiment with lip fillers, showing off a noticeably fuller pout, together with plump cheeks and a completely line-free complexion. While it’s pretty obvious she’s had some work done, there’s no denying the 56-year-old looks amazing for her age.

When talking to New Beauty, she confessed that life in the limelight affected her self-esteem, and as a result, she tried to combat aging by seeing a surgeon and getting regular touch-ups to make her look more youthful. “What would end up happening is that you go to a doctor who would say, ‘You look great, but what would help is a little injection here or filler there’. And also she adds that you need movement in your face, especially if you have thin skin. Those aren’t wrinkles – they’re smile lines. ” So we can understand that Courteney gets her beauty and confidence from plastic surgery. Let’s take a closer look at these surgical operations.

Courteney Cox’s lips changed until the start and end of the Friends series. Courteney’s lips are now fuller and shapelier than in the early years of her career, and she gained a new smiling in photos. This beautiful change was noticed by many of her fans.

When she gets older, Courteney Cox injected a facial filler into her skin to fill the gap where her cheekbone was sunk. The operation is designed to add volume to the skin around the face and remove fine lines on the skin, and this operation gained Courteney a very clear charm.

Courteney Cox has the figure of a much younger woman, despite being 56 this year. So, this situation led to speculation that she is undergone breast augmentation treatment. The operation process helps lift the breast tissue and pull sagging breast higher on the body. Also, it can be used reshaping of the breast. Thus, we can see that Courteney’s undergone work on her body, and her appeal continues to thrive as she ages.

Courteney Cox not only having facial fillers to reduce the look of fine wrinkles on her skin but also has undergone rhinoplasty treatment to change the shape of her nose. When she became famous, her nose was rounded and slightly larger in the nostrils but now, it is more aligned and pointed with her face. After rhinoplasty operation, her face looks more stylish. Courteney Cox Plastic Surgery